To prevent racist extremism, parents must engage teens, experts say – Spectrum News, NY1, May 2022 – Experts, including Shelly Tochluk, weigh on on why it is important for parents to engage with their children about their lives, worldviews, and monitor their online activity. Experts also discuss how far-right groups indoctrinate teens into joining their movements and how parents can disrupt their influence.

Racial justice work with heart, not a hammer – Peace News, February 2021 – Exerpted transcript from the Eyes on Whiteness podcast (see immediately below).

Eyes on Whiteness, November 2020 – Episode 9. Eyes on Whiteness, with Christine Saxman and Shelly Tochluk, who share their research and analysis of the ways we must be aware of and counter the rise of White Nationalism going into 2021.

Teaching While White, October 2020 – Episode 12. Hate Groups Recruiting White Students – podcast with Shelly Tochluk and Christine Saxman discussing the importance of having explicit conversations about race and what teachers and parents can do to support White students.

ERaced, A Podcast, October 2020 – Episode 9. Allyship featuring Shelly Tochluk and Ansley Newsom Kreitler. We discuss how to be a better ally and show up, the growing pains of understanding and accepting systemic racism, the difference between being an empath and an ally, and so much more.

ABC7 Bay Area, July 2020, Town Hall  – Allies in Action: A Bay Area Conversation – One hour live broadcast on the importance of allyship in our communities.

The Ryan Jespersen Show, 630 CHED in Edmonton, Canada, June 2020, Shelly and radio host, Ryan Jespersen, discuss some basic questions about how to understand race and how white people can learn how to talk about race.

St. Louis Groups Are Fighting Racism – By Keeping Their Own Groups White-Only, (June, 2019), Riverfront Times, a comprehensive look at the use of Witnessing Whiteness in the YWCA-St. Louis program and what it has sparked in terms of further action toward awareness building among white people.

Reacting to Whiteness: Learning to Recognize Identity, Privilege is the Key to Anti-Racism, (June, 2019), Insight Into Diversity discusses the backlash that can result from announcements of white affinity spaces and the real value they offer.

TEDx San Juan Island – September 18, 2016, This talk describes four approaches to conversations about race that can keep us engaged productively.

Public Radio Tulsa, July 18, 2016, Questions of race and ethnicity are clearly at the heart of American politics — and American culture, and American life — in an all-encompassing way that we as a nation haven’t seen since the Sixties. On this edition of Studio Tulsa, we speak with Dr. Shelly Tochluk, author of “Witnessing Whiteness: The Need to Talk About Race and How to Do It.”

Tulsa News on 6, July 18, 2016, A Los Angeles author and psychology professor was in Tulsa to discuss racial tension in America. She said one stepping stone to unity is to develop a way of thinking that is “both and” instead of “either or.”

CBS Evening News, November 2014, “CBS News’ Michelle Miller sets in on a meeting of “Witnessing Whiteness,” a group of residents hoping to better understand the black-white divide in the St. Louis area.”

The Philadelphia Inquirer   “Our world and the way it operates may not be as just as we think it is,” said Shelly Tochluk author of Witnessing Whiteness. Tochluk, an associate professor of education at Mount St. Mary’s College who is white, advocates for a race-conscious society, in which the legacy as well as the current reality of inequalities are acknowledged.”

From a librarian in St. Louis, Joy Weese Moll, who has read Witnessing Whiteness multiple times.

“Tochluk’s work will have a tremendous effect on any reader who picks it up. If you identify as white, it will open your eyes to race issues in your everyday life that you unknowingly ignore. It will also make you stop and think about the way in which you view the subject of race all together.” blogcritics.org

“Written by Dr. Shelly Tochluk, this book provides a compelling look at what it means to be white in America. It not only provides insight for white people, it can also be a valuable tool for people of color as together folks strive to work and live into accountable anti-racist relationships.”‌‌ Crossroads Newsletter, ‌‌Volume 14, Issue 2

“Witnessing Whiteness is a rare and precious gem in the national literature on race and privilege. Shelly Tochluk provides readers of this comprehensive volume with a well-crafted blend of personal and analytical material, which will prove helpful for anyone lucky enough to read it. Unraveling the knot of privilege and unawareness that so often binds white Americans and weakens the struggle for racial justice is a crucial task; and Witnessing Whiteness is a brilliantly honed tool for helping with that unraveling process.”‌‌ Tim Wise, author, White Like Me: Reflections on Race from a Privileged Son, and  Between Barack and a Hard Place: ‌‌Racism and White Denial in the Age of Obama

“In Witnessing Whiteness, Shelly Tochluk demonstrates first-rate teaching. With refreshing honesty and forthrightness, she invites readers – especially those of us who are white — to tread into the difficult terrain of confronting racism. Using rich storytelling and frank self-reflection, she skillfully engages readers in acknowledging, examining, and then taking on responsibility for racism and the work needed to dismantle it. This powerful and very readable book leads us through a clear analysis of why and how white people remain ignorant of and afraid to acknowledge racism, to laying out a practical framework for action. This book is an indispensable resource for white people who sense that racism is wrong, but don’t know where to start.” ‌‌Christine Sleeter‌‌, California State University Monterey Bay

“Accessing the amazing experiences and wisdom of activists, thinkers, writers, and mythologists on the front lines of racial issues in this country, Shelly Tochluk brings to light the most important book about race in a generation. Is ‘whiteness’ bad in itself? When is it just part of the social, historical and cultural legacy of a people? And what is the prison/poison that this legacy bequeaths us? I highly recommend this book—it’s helping raise race dialogue to a more healing and regenerative ground.”‌‌ Luis J. Rodriguez, author of “Always Running” and “Hearts & Hands: Creating Community in Violent Times”

“If we as a society are going to move forward and fully embrace the ideas in the Constitution, I think that it’s critical to address the wounds of white supremacy and racial trauma. As a black woman, I would read this book to develop a greater understanding of white people who’ve grown up in a system that has historically oppressed black people. I think it will help develop empathy for whites and their struggle to heal from our collective history. This is critical if we are going to truly build cross-race alliances and social and racial equality.”‌‌ Salina Gray‌‌, Los Angeles, California

“As a high school administrator, I think this book will bring sensitivity to racial discussions needed for a constructive and balanced dialogue to occur in any classroom setting. I would encourage the faculty and students to read this book because of the real life sharing of Dr. Tochluk’s personal journey and her willingness to explore her own experience. It is clear the information provided in this book does not leave the normative, social, legal contexts of race unaddressed.  The ability to acknowledge the dynamics between these contexts is crucial to understanding the web of relationships that have influenced race dialogue in our schools, communities and nation.  This type of book is another perspective needed to continue dialogue on issues being quietly ignored and dismissed as a trivial part of our history. I think this book will bring about a dialogue on race never imagined before in and outside of the classroom setting” ‌‌Michael Wagner‌‌, Assistant Principal, Los Angeles Catholic High School

“Having been involved in anti-racism work for more than a decade, I have observed with great anguish the difficulties white folks have in their journey to authentically adopt an anti-racist identity. Perhaps one of the most challenging moments in that journey is the initial step into the realization that they are deeply embedded in white privilege. Without any role models or mentors, white folks often resist this new paradigm or simply are paralyzed by despair, sadness and guilt. Dr. Tochluk’s book offers an honest, courageous and insightful vision for how white people can find a clear path in their quest to become truly anti-racist. Her clear and uncompromising voice, as well as her willingness to reveal her personal struggles around these issues, will grab your attention from beginning to end. A must read for any white person seriously committed to dismantling racism!”‌‌ Jorge Zeballos, ‌‌Anti-racist facilitator and activist‌‌, Kellogg Community College, Center for Diversity and Innovation, Battle Creek, MI 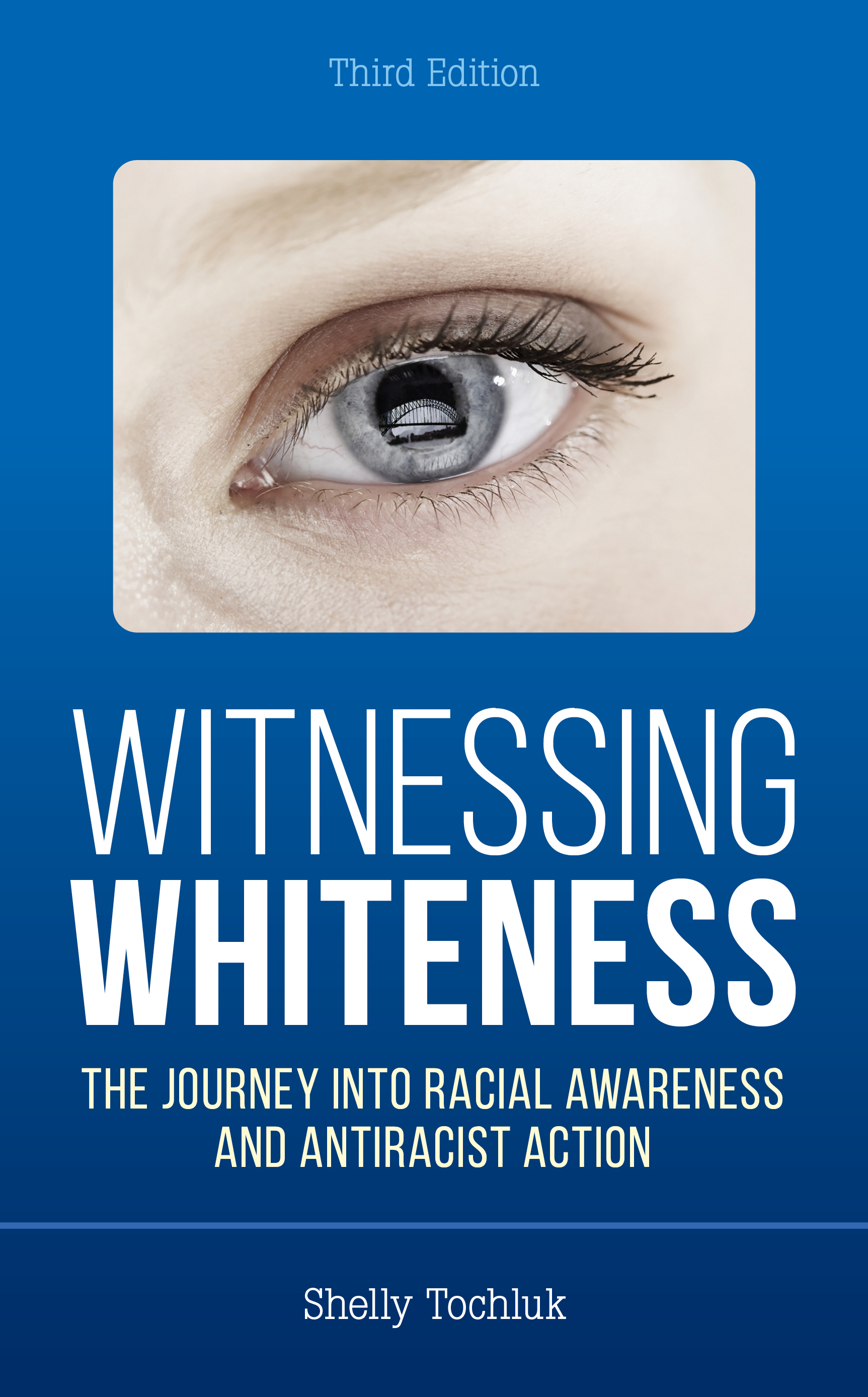